Starting a blogspot by reversing a .Net PE sound weird to me, but I need to start somewhere :p

This a Write Up about a Korean CTF challenge, the one is named CSHARP It’s not really hard (because of .net) but I found it interresting

The first thing to do is identify what is this PE 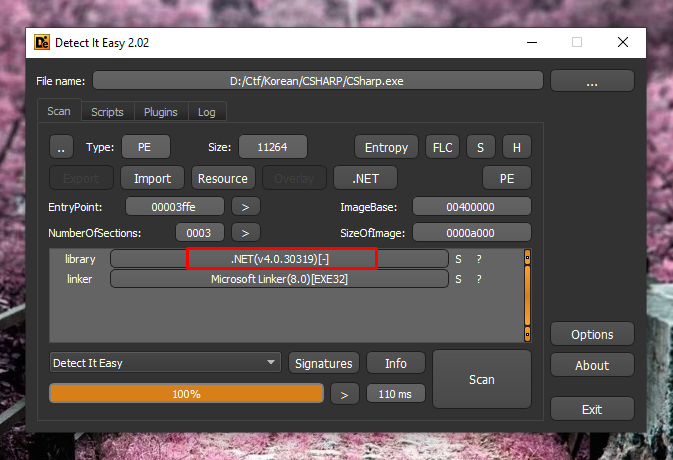 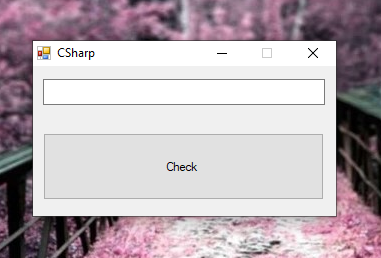 The typical .Net assembly icon confirm us that it is .Net 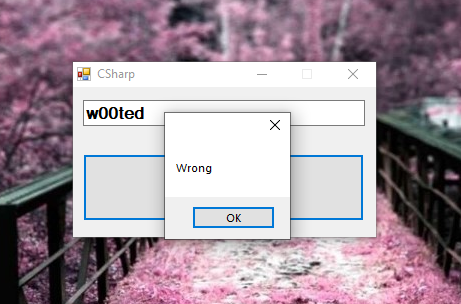 Ok so a classic check, a textbox and a message box of answer

So, let’s get started

It’s .Net so I will use dnSpy to decompile it 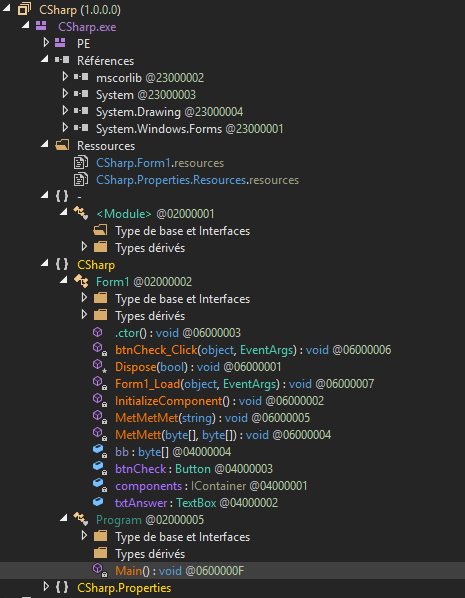 So let’s jump in the Form1 class

In imports, we can see something interesting, the System.Reflection library is used to manage assembly in general, so we will have to deal with assembly manipulation.

To begin, I will check for the constructor 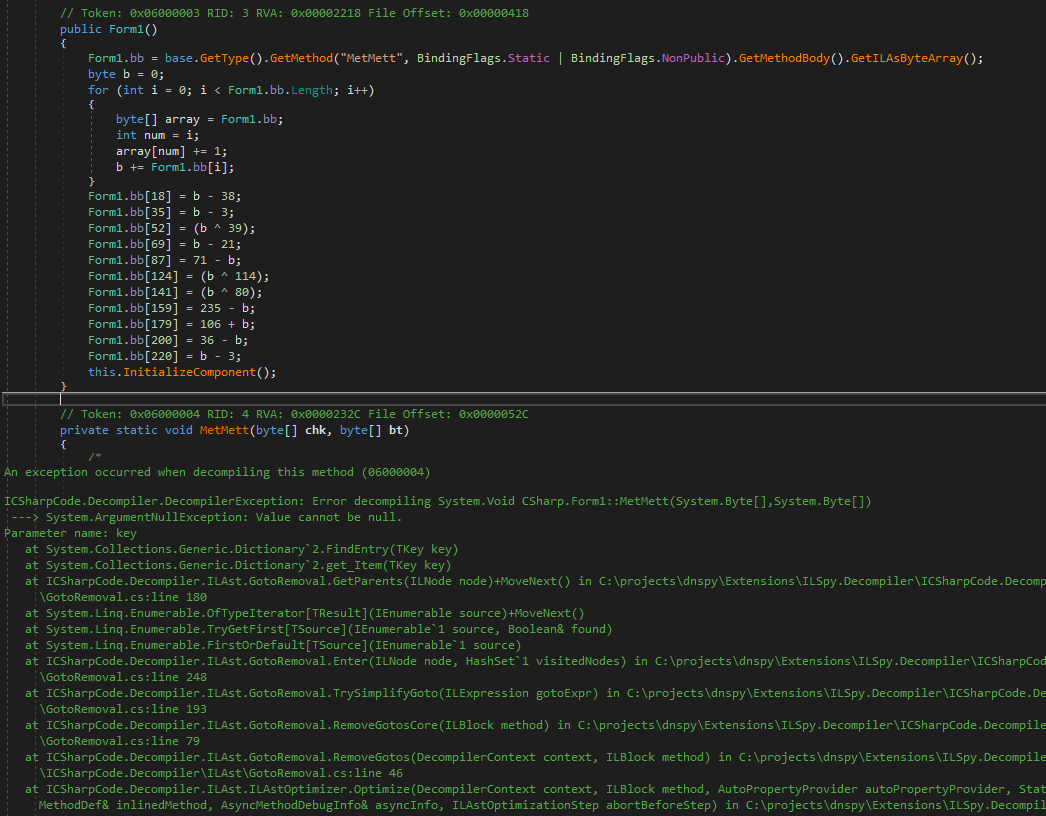 Something is done here 🙂

The "MetMett" function fail to be analyzed by dnSpy, so I assume that is encrypted

By analyzing the constructor, we can see that the raw IL instructions bytes of the "MetMett" function is stored in the bb variable 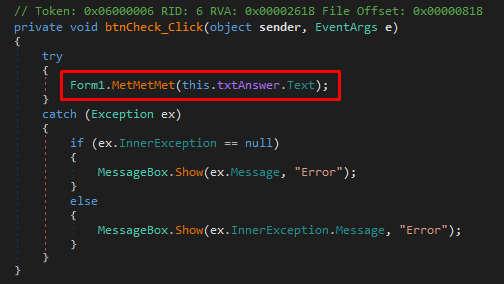 So the "MetMetMet" function is a little bit too tight, so I will analyse it step by step 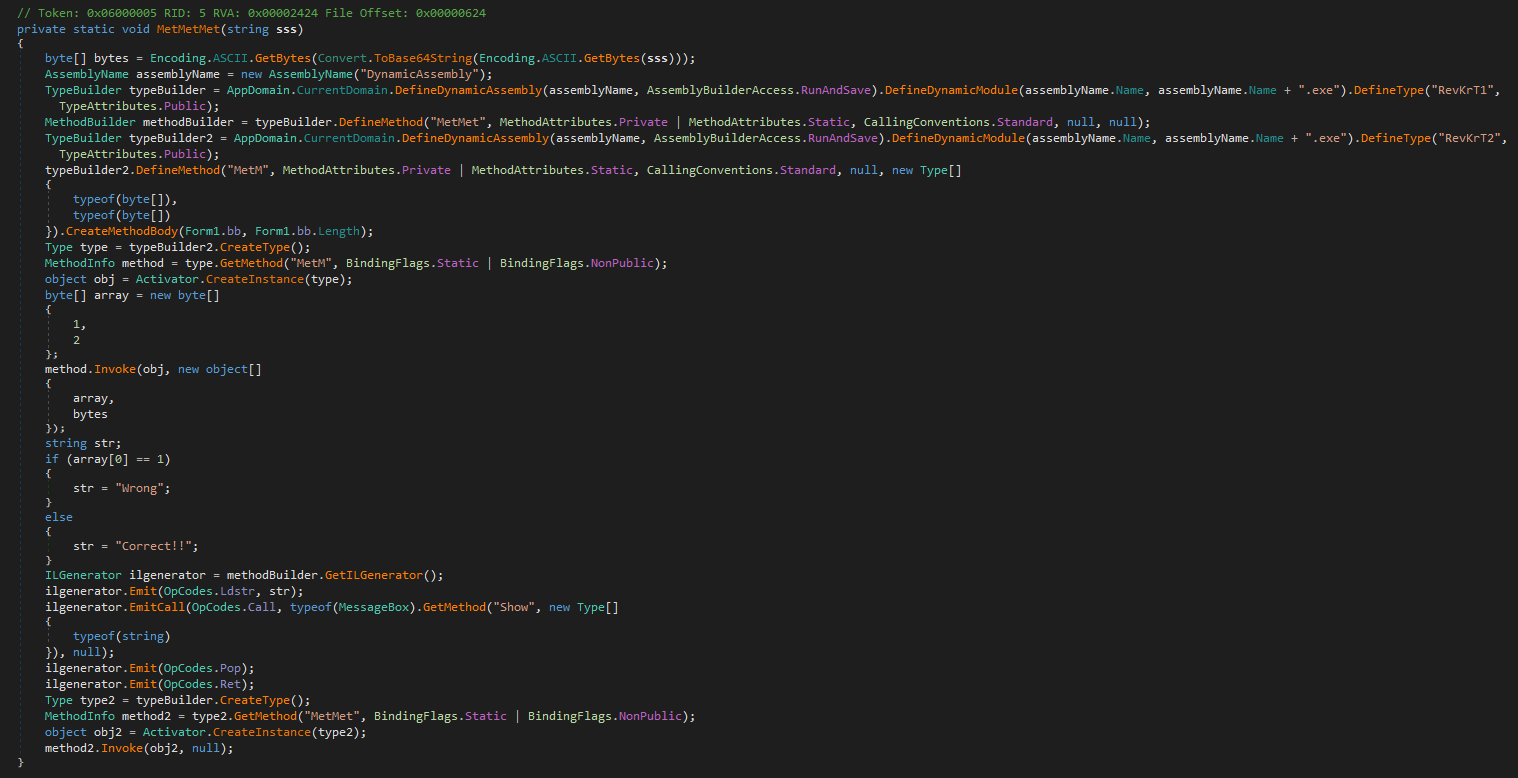 After the function create a Dynamic Assembly in memory, create a class called RevKrT1 and define a function called "MetMet" in it

The function creates a second module in memory, create a class called RevKrT2 and define a function called "MetM" in it

The method "MetM" is writed with the bb variable seen above, so we was right 🙂

The "MetMett" function stored the encrypted method, it is decrypted at start and stored in bb variable, and after, it is writen in memory as the "MetM" function

After that this function is Invoked from the second module (RevKrT2) and use the input base64 bytes in arguments. 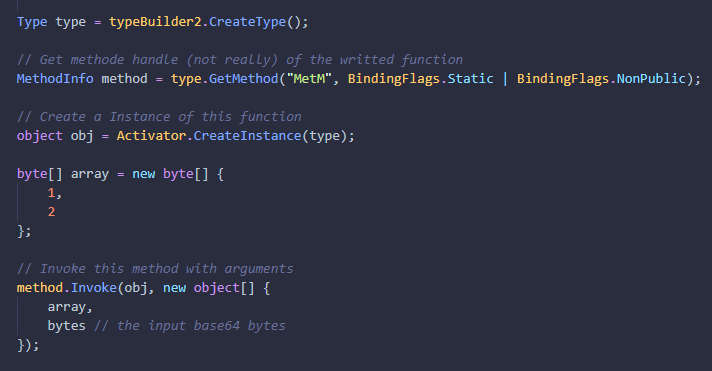 And here we are 🙂

After the call of the decrypted function, we have the answer of the validation. This means that the previous called function is the check for the password

So what we know from here :

We learn that the "MetMetMet" function craft two dynamic modules, one which check the password (MetM)

And one with the messagebox of validation (MetMet)

I’m going to put two breakpoints One after the modules creations and "MetM" method definition And one after the definition of the messageBox, to see if we are right 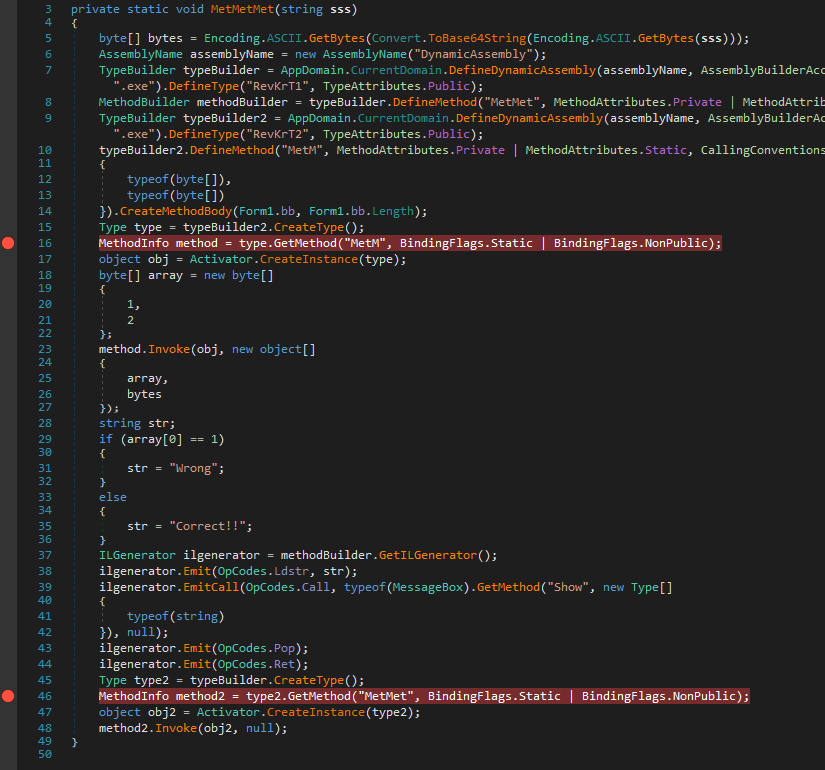 When the first breakpoint hit, we see the modules in memory 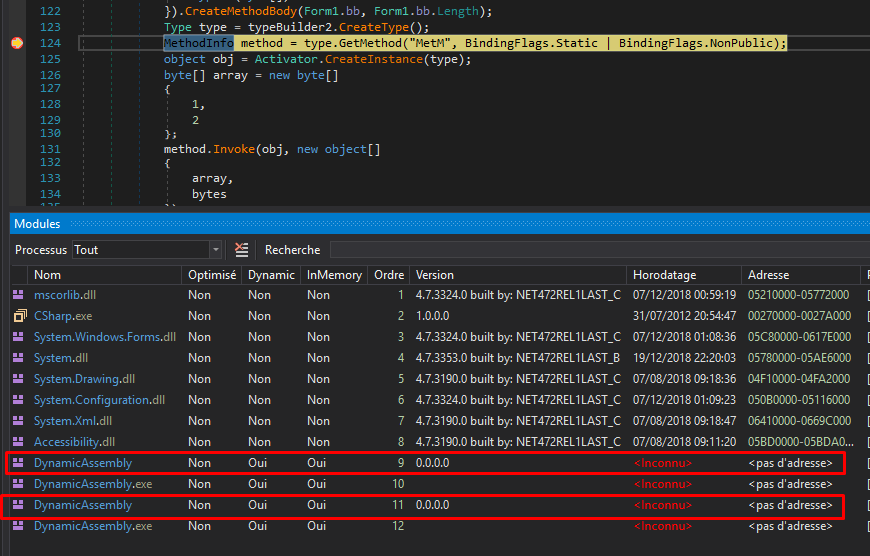 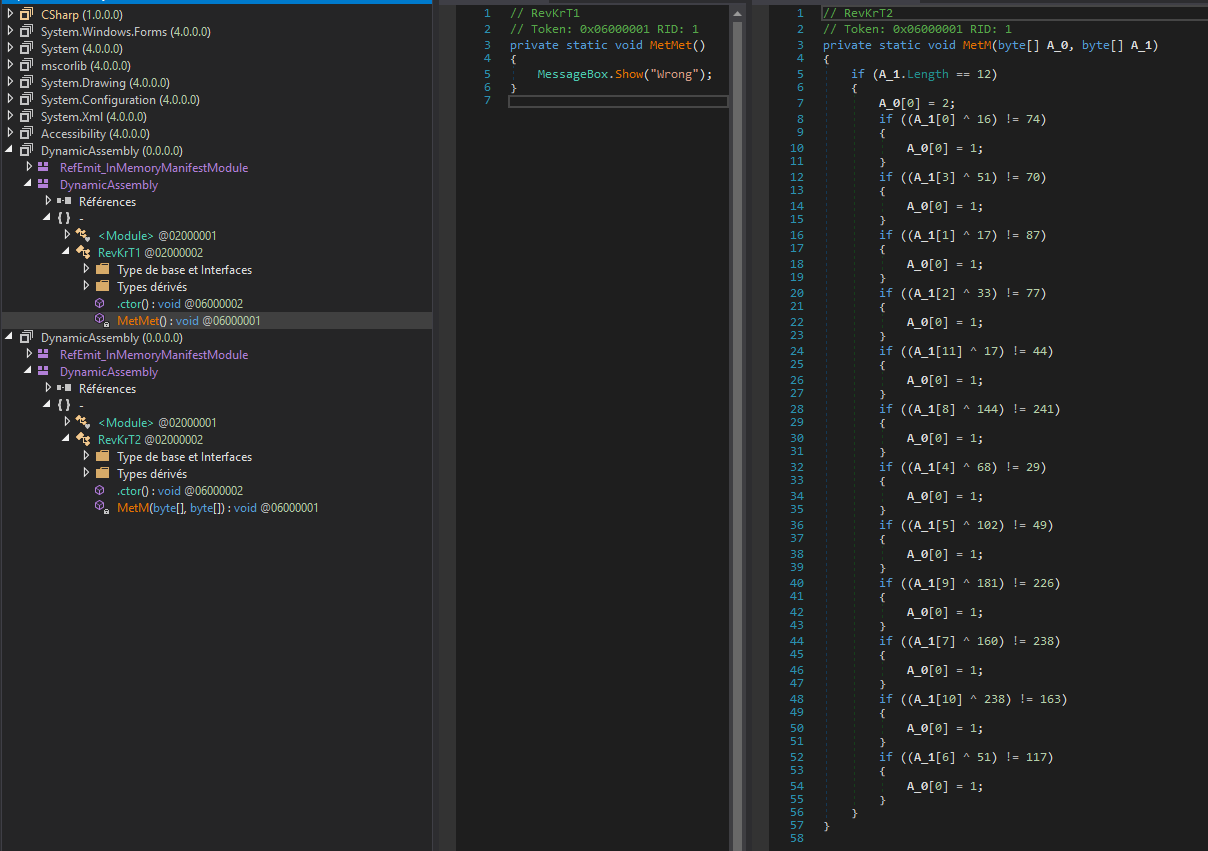 We see the code 🙂

From that we have just to reverse the check function 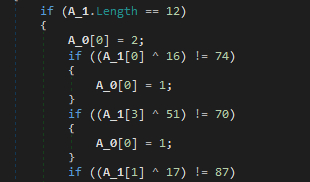 The check is not difficult, just xor and cmp, so easy to make a reverse script 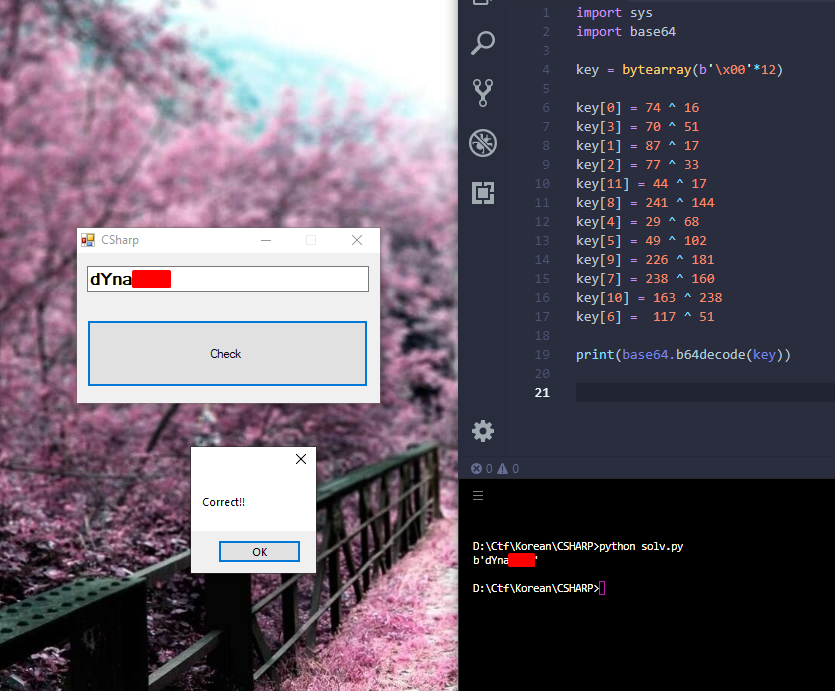 It was not difficult but it used uncommon obfuscation techniques (create modules and store decrypted functions in this module) this change of traditional Control Flaw Obfuscation. I found it really fun and it’s why I made a writeup about it.