This is my exploration around VMProtect security. VMP is a well known protection with a lot of features, main ones are Code Mutation and Virtualization, and compared to them, this part is the simplest regarding VMP. I will talk about all of those in future posts, but now I will focuse myself on the Packing and the Import Obfuscation.

Packing is about compressing / ciphering executable’s sections to prevent static analysis. It’s not very effective considering that the code and the sections should be deciphered at some point during the execution.

In this case, VMProtect doesn’t store the real “RawFile” sections informations in the PE header, which is a good thing. But.. the virtual addresses and size should be stored in the header so the kernel could alloc the correct size for the executable, so we can still notice sections sizes and possible addresses (without considering ASLR).

Regarding the packing in raw file, everything is melt in one of the VMP section .vmp1 (ciphered sections, unpacking routine, section informations, .. )

The only section that is not “protected” is .rsrc because Windows need to read it to extract icons and other informations to display on properties menu. VMProtect has an option to protect resources regarding this, so it could split resources in two parts, one readable for Windows. And one containing only “program’s data”, ciphered, and deciphered during the execution of the program.

As we can see on the screenshot, unless .data section, all sections are not writable. So VMP will have a to call VirtualProtect (or something similar) to change the section’s attributes in order to change them. In fact, VMP used VirtualProtect in the past, but since 3.x, it use an higher “undocumented” kernel API called ZwProtectVirtualMemory which has the same purpose.

So now we can start dynamic unpacking ! Considering that ZwProtectVirtualMemory is called a lot of times by Windows internals, we will put a breakpoint on it only when the the entrypoint hit. 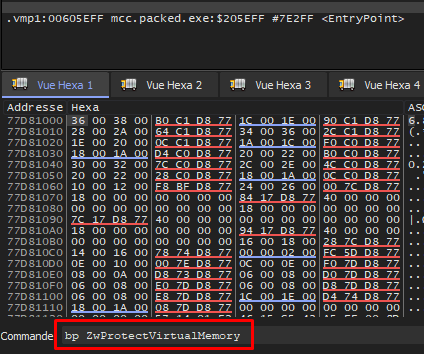 Note that the entrypoint looks like a VMProtect virtualized routine, and in fact, it is ! In the past (version 2.x), VMP unpacking routine were not virtualized (like in this video), so it was easy to rush and breakpoint the jump to OEP (push and ret).

And from here, we can just dump the executable with any tool to get a clear dump (without import fixed) of the PE.

From that (and the part 2 of my research around VMP), I will assume that .vmp0 section contain virtualized / mutated programer’s code (and IAT related code), and .vmp1 contain all things linked to the unpacking process (ciphered sections, virtualized unpacking routine, section informations, .. )

As the unpacking routine is virtualized, it’s pretty hard to find it from VMP code. So we need to do it with some tricks. In this case I though it could work if I monitor the EIP and store it when it switch from .vmp1 to another section which is not .vmp0, and it worked. I tried a Qiling script for this, but as Qiling doesn’t implements ZwProtectVirtualMemory I can’t do much. So I did an unicorn python script to accomplish this.

We can find the same result by putting an hardware memory breakpoint about execution on the .text section. In my case, the OEP was the first function on top of .text, but it’s a rare case, so you will probably never meat this one.

You can spot the OEP by looking at the first function stack cookie (like in this very good article) which as the value 0x2B992DDFA232 when the executable is compiled using VC++.

You can still find the OEP by hand, by trying to go on the bottom of the stack to spot the possible first return address.

VMP’s IAT obfuscation is in option, and not set by default. So IAT reconstruction is not necessary when the dev don’t know how to use VMP (and trust me, it happens sometimes). Of course, I turned this ON for my post :)

First thing to see is that the original IAT is still saved, but not used. 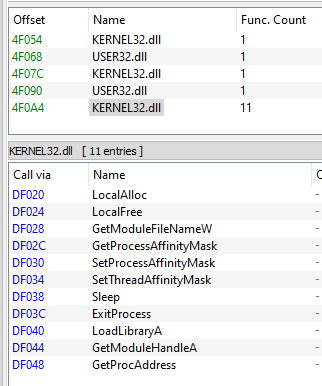 So you can see what API the program is using, but you can’t link them to the code (cross references) because import addresses are “calculated” runtime. In my point of view is that they should import one random function of the DLL if they want to keep the IAT clear like that, not just leave everything in place. Or just completly remove the IAT content and load each DLL with LoadLibrary and resolve imports later.

So if we take a look at a call to an API in the executable, we can notice that luckily, the API call’s are only mutated, not virtualized !

Each call to IAT in the .text, exemple : call dword ptr ds:[<&CreateProcessW>], is 6 bytes long.

VMP changed each API call to this kind of call :

Thoses two instructions are also about 6 bytes in order to keep the code “alignment”. There is one mutated_api_resolver function for each API call, it could explain why VMP makes such big outputs (also because of virtualization). So VMP use a register random_register to pass something to the api resolver.

Here is a mutated version (edi is random_register) :

NOTE : this code is, like I said, in the .vmp0 section

And here is a cleaned version (reg is random_register) :

So to summerise, VMP setup a variable on the stack to jump to the next API address by doing a push and ret.

This address is calculated by :

Some tools were made by 0xnobody, can1357 and mrxodia to unpack and fix imports in x64 (here).